Think of the love that the Father has lavished on us,
by letting us be called God’s children;
and that is what we are.
– 1 John 3:1 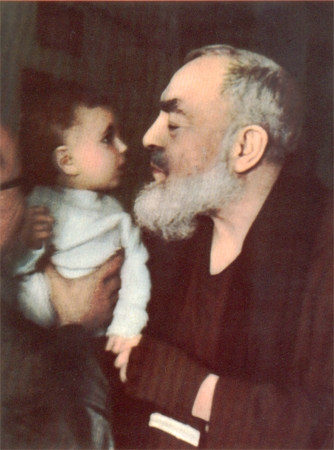 “On December 5, 1976, my second child, Kelly was born in the Mater Hospital in Belfast. She was delivered by cesarean section because it was discovered before her birth, that her heart was beating very rapidly and that she was very distressed.

While I was still under the anesthetic, I remember a nurse telling me that the little girl I had just given birth to was very ill. They needed her name, because they were going to baptize her.

Kelly had been born with a congenital heart defect which also caused her to have a grossly enlarged liver. She wasn’t expected to live through the night.

I lay in bed in the hospital and prayed that this little girl would live. I always had a great devotion to Our Lady and I said my rosary that night as if I was sending a message with no room for error.

I thought about all the babies that had been aborted or given up for adoption. I knew that at birth, Kelly had been very blue and didn’t breathe for a few moments. It was suspected that she might have brain damage as well. In my prayer I told Our Lady that I didn’t care whether my little girl was deformed, handicapped mentally or physically I wanted her and I’d accept her however the good Lord would give her to me.

The next morning, Dr. Muriel Fraser told me plainly Kelly wasn’t going to live. They had discovered her heart had not developed properly. Instead of the normal two ventricles, there was only one. The older Kelly got, the greater strain it would be on her inadequate heart. Inevitably, death would come from a massive heart attack. If they could get her stabilized, Kelly might have a future but only for a short time. We had to try and accept that she wasn’t going to be part of our family for very long.

My husband Jim went to see Kelly in the special pediatric intensive care unit of the hospital. He remembers looking at all the little babies in incubators, some of them deformed and some of them who really didn’t look as if they had much life left. Then he came to our baby. He told me later that our baby looked so perfect in every way that he said to the doctor how terrible it was for all the other babies that were in the ward— they looked so ill, as if they weren’t going to survive long. The doctor replied that the other children had between a thirty to fifty percent chance at life but our baby had not even a one percent chance of survival. There was, the doctor said, absolutely nothing anyone could do for her.

My mother handed me a prayer for the intercession of Padre Pio and said,”Say the prayer to Padre Pio and leave it all in God’s hands.”

My mother told me a few words about Padre Pio’s life. She said that he was such a holy man that he could look into your soul and tell you what sort of person you were. Instantly, I took a dislike to him. I smile thinking about it now but I felt, “Well, if he looks into my soul, there’s no way he’s going to give me the miracle I need.” Sinner that I knew I was, I decided then and there that Padre Pio wasn’t for me.

For at least the first nine months of Kelly’s life, she couldn’t lie back. She had to sit up in a chair or her breathing became quite erratic. Kelly seemed to sleep all the time, got tired very, very easily, distressed very, very easily. At the least exertion whatsoever, her lips would turn blue.

My mother said a novena prayer every day to Padre Pio. I still couldn’t find it in my heart to turn to him. I didn’t honestly believe I was a good enough person to get a miracle through him. I felt he had been such a good and holy person in his life that he would accept nothing less from anyone who wanted his intercession. How wrong I was!

Every month we took Kelly for her checkup and every month we were told the same thing. Her condition hadn’t changed.

It was nearing Kelly’s fourth birthday and she was very ill. The doctors wanted to do another heart catheterization. I think they felt things were becoming crucial. I was going to have to make a decision about having this test done, knowing any little trivial operation could kill her. But I had to give her any chance I could.

Considering my relationship with Padre Pio, I wasn’t too sure about this, but my husband and I decided to go to the woman’s house and get Kelly blessed. The woman who had Padre Pio’s mitten was named Kay Thornton. She was getting ready to go to San Giovanni Rotondo (where Padre Pio lived and is buried). Kelly was blessed with the mitten in the name of the Father, the Son, and the Holy Spirit. I also asked Kay to have a Mass said for Kelly in San Giovanni. Kay gave me magazines and prayer leaflets on the life of Padre Pio which I rolled up and put in my handbag. As we were driving back home, Kelly fell asleep in the back of the car.

As she was still sleeping when we reached home, I picked her up and put her to bed. I went to bed myself, and for the first time I said a prayer asking the intercession of Padre Pio.

Barely had I finished my prayers when Kelly came into the bedroom and said there was an old man in her room. I told her she was only dreaming. “No, Mommy, there’s an old man in my room. Come quickly so you can see.”

I took her back to her room, where she pointed toward a corner and said,”Mommy, look! There he is!” I could see absolutely nothing, so I tried to explain to her that there wasn’t anyone there. “Don’t be afraid,” I said. “I’m not afraid, Mommy,” she answered, “but he’s there.” “Look!” she insisted.

By this time I was getting a bit cross. I said, “No, Kelly. Come on, you have to go to bed now and go to sleep, because you’re going to the hospital tomorrow.” But as I was tucking her in she was still insisting that there was an old man standing in the corner of her room. I went back to bed and wondered if she could be hallucinating. As I lay in bed I could hear her laughing and giggling in her room.

The next morning as we were getting ready for the trip to Belfast, I asked Kelly to get something from my handbag. When she opened my handbag she called, “Mommy, Daddy, come quickly!”

We ran into the living room and there Kelly was sitting with a magazine that Kay Thornton had given me which pictured Padre Pio on the front.

Kelly pointed to the picture and said, “Mommy, that’s him. That’s the man that was in my room last night!” I said, “No, Kelly, that’s Padre Pio.” “But he’s the man, Mommy, who was in my room last night,” she insisted. She didn’t say, “That’s Padre Pio.” To her it was just an old man. She had said the night before that he was an old man with a black coat. Now as I looked at the picture and saw the dark Capuchin habit, I had to accept the fact that it could have been Padre Pio that was in her room.

When we got to Belfast, I told my mother what had happened and she was delighted. She was fully convinced that Kelly was going to be all right.

Kelly was admitted to the hospital and had her catheterization. Afterward the cardiologist met with me to discuss Kelly’s condition.

The cardiologist began: “Mrs. Wilkinson, I don’t know how I’m going to explain this to you but I’ll try. For the past four years you have been coming here religiously with your daughter and we haven’t been able to give you any consolation or hope. And for that I’m very sorry. But I have in front of me Kelly’s catheterization done at birth and it clearly shows she has a single ventricle, a congenital heart defect, and a grossly enlarged liver. And then I have here the catheterization done today. It shows absolutely no congenital heart defect. Kelly’s heart today is perfectly normal. The piece that wasn’t there is now there. And the liver has reduced in size.”

“Now last night we were keeping a close eye on Kelly because her heart seemed quite normal for the first time and her liver seemed to have reduced in size. I was quite baffled, especially when we did the catheterization, because they both look so different. My diagnosis today is that Kelly is a perfectly normal, healthy child. I can’t explain it. There is no medical reason for it. Somehow you have obtained a miracle. So take Kelly home, because there’s absolutely nothing wrong with her.”

I burst into tears and babbled that I knew exactly what had happened, that I had been given a miracle, and the man through whom it came to me was Padre Pio.

Condensed from “Nothing Short of a Miracle” by Patricia Treece

A Prayer to Padre Pio

Because the first must be the last
And only little ones may pass
Beyond the gate, narrow and small
Where God is waiting for us all.

St. Pio, lift my spirit up
I raise to you my empty cup
As I approach the narrow way
Make me a little one today.