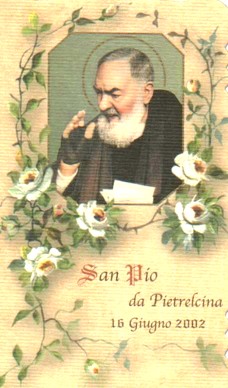 In my younger years, when I was on a quest to grow in spiritual understanding, I found a used book, a biography of Padre Pio. After I read the book, I knew that I wanted Padre Pio to be my spiritual father for the rest of my life. Many years later, I read another book on his life and my dedication to him grew even greater.

When my mother and father were in their early 80’s, they were having some financial difficulties. One night I knelt by my bed and prayed, “Lord, send Padre Pio to my parents to help them.” Two weeks later, I was visiting my parents when my mother said, “I had a most unusual experience a few nights ago. I woke up at 3:00 a.m. and there was a monk standing right next to me. The hood of his habit was pulled up on his head.” I asked my mother if she was afraid and she told me that she had no fear at all. On the contrary, she said that she felt very peaceful. When the monk appeared at her bedside, she looked over at my father because she intended to wake him up, and when she looked back, the monk was gone. I then told her that I had prayed to Padre Pio and I had asked him to help both her and my father. Right after that, my parents’ financial difficulties all resolved and they had no more worries. I believe that my parents realized that Padre Pio’s visit was an answer to my prayers. But because they were both Protestants, and because the idea of saints was not in their religious tradition, I feel that they had some difficulty comprehending what had happened. Through the years, the blessings that I have received from Padre Pio continue to help me and to strengthen my faith in God.