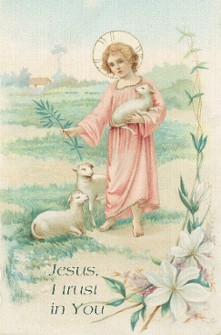 My mother suffers from Alzheimer’s disease. I had been taking her to an Alzheimer’s day care center but recently I was told that  my mother could no longer return. Her dementia was so severe that the administrator recommended that she be placed in a secured Alzheimer’s facility in a nursing home.

I looked and looked but could not find a facility that would fit my mother’s needs. I became very worried. Then I prayed to Padre Pio and asked him to help me find something suitable. Right after that prayer I had a dream in which a saw a number of Catholic women caring for my mother. They all had dark hair but I could not see their faces clearly. In my dream, I took my mother’s hand and we walked outside. We were in a heavenly place. The sky was a midnight blue, the most beautiful blue I had ever seen. It had a velvet-like quality and I would call it a “living sky” because it was pulsating with life. A huge round moon, like a glowing iridescent pearl was reflecting in the clear waters of a lake that we were standing in front of. A forest of emerald colored trees surrounded the lake. A waterfall cut through the trees, causing their leaves to shimmer and sparkle like diamonds. Every leaf was alive and shimmering.  The intensity of the colors was such that the  most beautiful place on earth would look like a wasteland in comparison. The beauty of what I was beholding almost took my breath away and I could not take my eyes from the sight. Then I woke up.

Right after that, I went to visit another nursing home. When the administrator greeted me, I noticed that she was wearing a crucifix for a necklace. As she took me on a tour of the facility she mentioned to me that she was a Catholic.  We passed by a large room where many of the residents were gathered. They were singing. They all looked happy and I also noticed that the staff was very friendly.  This care home was not depressing like the others I had seen but  was actually uplifting. The administrator explained to me that the Alzheimer’s unit had no openings. There were 275 residents in the skilled nursing section and 50 in the Alzheimer’s section and there was always a waiting list of people in the skilled nursing area waiting to move over to the Alzheimer’s unit. They always had preference over anyone coming in from the outside.

She took me to the Alzheimer’s unit and introduced me to the head of Staff Development. She was a wonderful Catholic woman I had known a number of years ago.  She told me there were no openings in the Alzheimer’s unit. It was such a loving and caring environment that I decided to have my mother’s name added to the waiting list even though it looked like it would be a long wait. But the problem was that I could not wait. I needed to find a place for my mother immediately.

Then I went to see the Admission’s administrator. As we talked, I learned that she was a member of my parish, even though I had never met her before. She told there were no openings. I told her that I had been praying to Padre Pio for my mother’s needs. She seemed so surprised to hear me mention Padre Pio’s name. She told me that for the first time ever, she had just sent his prayers to one of her sick relatives.”I think you and I have some kind of Padre Pio connection” she said to me. Then I remembered my dream. In a very short period of time, I had just met three Catholic women and they all had dark hair, although in my dream I could not see their faces clearly.

She made a short phone call and then said to me, “We do have an opening. There is one opening in the Alzheimer’s unit.” My mother was admitted immediately. She went to the unit for lunch and then to take a nap. My mother has been truly happy in this nursing home and the tender loving care she receives is an inspiration.

Sometimes I become very sad when I remember the way my mother used to be and all that Alzheimer’s disease had taken from her. Then I think about my dream and that heavenly place we were standing in. Perhaps I got a little glimpse of the beautiful place that God is preparing for my mother, when she leaves this life for a better one. Even if we have to endure many sufferings here below,  it doesn’t really matter so much, when we think about our true home, Heaven.