I turned every way, but there was no one to help me.I looked for one to sustain me, but could find no one. But then I remembered the mercies of the Lord, his kindness through ages past; for he saves those who take refuge in him, and rescues them from every evil.

A FANTASTIC BUT TRUE STORY 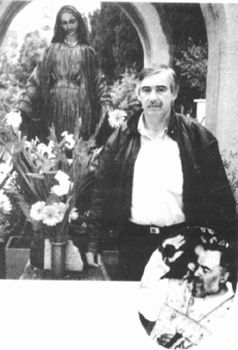 A photograph of Donald Fitzgerald with insert of the relic badge he always carries with him.

Donald Fitzgerald was born and reared in Dublin, Ireland. His parents had 16 children, but half were lost as infants. From the age of 15, he became an apprentice stonemason. Soon afterwards he was taken very ill with stomach ulcers which needed not one but three surgeries. While ill, a friend, who had been to San Giovanni Rotondo gave Donald a relic badge of Padre Pio which he wore every day around his neck.

Work was scarce in Dublin so he emigrated to a small fishing village in County Galway, Ireland called Rosáveál, where he found work on a fishing boat named “The Boy Patrick.” The work mainly entailed fishing for prawns. He had been fishing for nearly 12 months and at the end of January in 1975, the Captain, Donald and four men set out for a fishing trip of 10 days. After the fourth day they were about 200 miles off the Irish coast, when the weather looked as if it was going to change. By this time they had about half of their hoped for catch.

The next day the winds built up to a gale force of 8/9. The Captain called the nets aboard and gave orders to head for shore. The nets were filled with prawns. The waves were reaching 15 to 20 feet in height. The large bag containing the fish swung from side to side. Donald’s job was to pull the rope which releases the fish onto the boat. One strong wave after another bashed against the port side of the boat. He had his “sea legs,” so that he was able to balance himself with the movement of the waves. However, a double wave suddenly hit the boat and he lost his balance and the big bag of prawns swung against him and knocked him into the sea.

Donald cannot swim, but the raging sea was too strong even for a good swimmer. He was carried about 500 feet from the boat and realized he was going to drown. He grabbed for the relic of Padre Pio around his neck and invoked his help. At that moment he smelled what he called a “beautiful perfume.”

All of a sudden Padre Pio was standing in front of him. Padre Pio told him not to worry, he would not die. He felt someone lift him out of the water and put him back on the boat. The next day the sea returned to normal and they carried on their trip and eventually returned to port with the catch.

During the ensuing years Donald found work in London as a stonemason. He married an Irish girl named Elizabeth. Their family consists of three children, two boys and a girl. The boys who are now adults working with their father who has become a qualified stonemason. He is planning a monument of Padre Pio with the permission of his parish priest. It will be the first such monument in London.