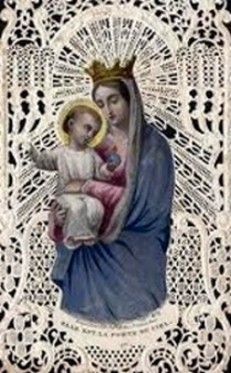 I was born near Bagdad, Iraq and baptized in the parish of the Virgin Mary of the Holy Heart. When I was still a baby,  my parents decided to move the family to the United States to escape the dangers of the country and so that my brothers and sisters and I might have a better life. It was a great sacrifice for them to leave their country and all that was dear to them but they knew it was for the best. I learned about Padre Pio in 2006 and started attending the Padre Pio prayer group in San Diego. On occasion, I brought my mother with me and she liked it very much. 2007 was a devastating year for the Chaldean Catholic community in Badgad.  My mother became very distraught over the tragedies that were occurring there. Chaldean Catholic bishops, priests, and deacons were being threatened daily. Extremist terrorist groups warned them that they would be killed if they continued to have Mass in their churches.

My mother watched the news on television one day and saw several of the Catholic churches in Baghdad that were destroyed by roadside bombings. She was filled with anxiety and wept over the tragic events. She had a great love for the parish she had attended when she lived in Iraq and feared that it would also be leveled just like the others. One evening when my mother was very sad, I took her to the Padre Pio prayer group with me. When we came home, I placed a picture of Padre Pio next to my parents’ bed. That night she had a vivid dream. In her dream, she was praying and pleading that God would protect her parish in Baghdad. Padre Pio suddenly appeared in her dream. He raised his hands and she could see the marks of the stigmata. He said to her in Aramaic, “Do not worry. There will be victory.” When my mother woke up, she was filled with a great sense of peace. My parents’ parish in Baghdad is still standing today. Although one window was shattered and an outer wall was damaged by an act of violence, the church was repaired and Mass is said there regularly. My parents have remained very devoted to Padre Pio.