I do not count my life of any value nor as precious to myself,
if only I may finish my course and the ministry that I received from the Lord Jesus,
to testify to the gospel of the grace of God.
– Acts 20:24

“The Home for the Relief of Suffering” 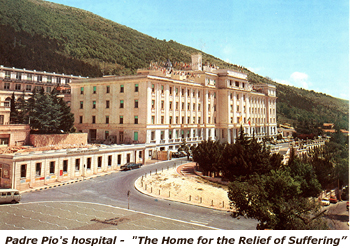 When Padre Pio was sent to the monastery in San Giovanni Rotondo, there was not one hospital in the entire region. The closest hospital was 25 miles away and people had to travel on roads that were nearly impassable, using the most primitive means of transportation. Often the sick would die on their way to the hospital. It was Padre Pio’s great desire to build a hospital in San Giovanni and provide the people with adequate medical care. His dream was realized in 1956 when the hospital which he named “Home for the Relief of Suffering” opened its doors to the public.

Laurino Costa was employed as head chef at Padre Pio’s hospital, “Home for the Relief of Suffering.” His encounter with Padre Pio in the confessional was not typical. But then again almost anything could happen in Padre Pio’s confessional. Laurino’s story begins with the strange sequence of events that brought him to San Giovanni Rotondo.

“I had been living in a small town near Padua, and I was out of work. I heard about Padre Pio through a friend. My friend gave me a small photograph of Padre Pio, though I had never met him. It made a deep impression on me, and I took it and put it in my pocket. Frequently at night I would dream of him.

It occurred to me that I might write to Padre Pio and ask for his blessing to help me find work. I sent Padre Pio a telegram and immediately received a telegram from him in reply. He said, “Come to San Giovanni Rotondo right away.”

For me to go to San Giovanni Rotondo was no small thing. It was a long and expensive trip, and I was penniless at the time. But on February 4, 1958, I set out. I arrived at 4:00 a.m., in time to attend Padre Pio’s Mass. After Mass, I went into the sacristy with all the other men to meet Padre Pio. The Padre beckoned to me with his hand, but I did not budge. I thought he was looking at someone else. He called me out of the large crowd saying in a loud voice, “Laurino, come, come here!” Padre Pio recognized me among so many people, although I had never seen him before and he had never seen me. I approached him, shaking like a leaf. He said to me, “Well now, go and feed my sick.”

I didn’t know anything about cooking, and I had no intention to stay, but he insisted that I stay. I said, “But Padre, I’m not a cook. I have never cooked before. I don’t even know how to cook an egg.”

Someone showed me over to the hospital and introduced me to the Mother Superior. She greeted me with, “So you are the experienced cook we were expecting.” I was too stunned to reply.

At 7:30 a.m. I went to the kitchen. It was a frightening sight–this great spacious kitchen with huge kettles, stoves, sinks, pipes, basins, kitchenware, and so forth. I never saw anything like that in my life. But the most alarming feature was the sight of the kitchen employees standing there, waiting for my orders.

However, as soon as I entered, I had the sensation that I had always been there. I felt as though being a cook had always been my trade. Everything seemed familiar to me. I had no doubt that I could do the cooking. So I went ahead with it. That first day I cooked for about 450 people.

After a short while Padre Pio wanted me to bring my family here and so we settled in San Giovanni Rotondo. Padre Pio never wanted me to leave. Just before he died, my days off were due and I was planning to go and visit my relatives for seven or eight days. He said, “I will give you five days.” That was precisely enough time to bring me back for Padre Pio’s death.

When I first came, I had some doubt in my mind that Padre Pio was really a saint. I never told anyone that I had these doubts. Then one day I went to confession to Padre Pio. I saw him in the confessional with his head tilted to one side. I saw a deep cross on his forehead. His face was bloody. He was staring at me, his eyes fixed on me. “Mama Mia”, I said to myself. I started to shake. I put my hand in my pocket to get a handkerchief and wipe his face, but my hand remained in my pocket. I could not move. We just kept staring at each other. I felt as if I was going to faint.

Padre Pio began to tell me all my sins. Then he gave me absolution. I saw that the blood on his face began to disappear. The cross on his forehead also disappeared. I left the confessional and I began to cry. I went on crying for three days and three nights. I said the rosary continuously.

I went to Padre Clemente and asked him to explain why Padre Pio had revealed himself to me the way he had. He told me to ask him but I did not have the courage to. Padre Pio was always before my eyes. I could not eat or sleep and I cried continuously.

I decided to go to the friary and ask Padre Pio why he had revealed himself to me like he had. I got to the end of the corridor and saw Padre Pio leaning against the door outside his room as though he were waiting for me. I felt unable to move and I could not utter a word.

He saw me and said, “Come Laurino, come! What’s the matter? What has happened to you?” But I couldn’t find my voice. Finally I said, “Padre, tell me why you made me see you like that? Is it perhaps because of me that you suffer so much?”

You see, it happened because of my doubts about his sanctity.”

Condensed from “A Padre Pio Profile” by Fr. John Schug