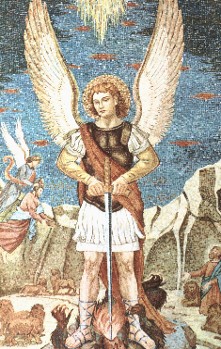 In the early 1950’s, my brother, Francis Briguori, made a trip from Naples to San Giovanni Rotondo to see Padre Pio. He was able to make his confession to him. While making his confession, he told Padre Pio that he wanted to join the Navy but did not think he would be accepted because he had a heart defect.  Padre Pio looked at him with a very piercing gaze and said, “Tu Vai, Kapish!”which means, “You go, do you understand!” At the end of the confession Padre Pio told my brother to pray to St. Michael the Archangel. He said to my brother, “Michael is your name, too.” My brother’s name is Francis Mario Michael Briguori. He was so completely taken aback that Padre Pio knew his name that when he left the confessional, he told all the people waiting in the sacristy, “I can’t believe it, he knew my name!”

Right after that, my brother enlisted in the Navy. On the day that he went in for his medical examination,  there were many other young men there who were also having their medical exams. When my brother’s name was called, he was told, “Tu Vai” the very same words that Padre Pio had said to him. Evidently he looked so healthy that he was waved on ahead of the others and was accepted without a physical exam. My brother had a wonderful career in the Navy working in the field of shortwave communication. He traveled to many different parts of the world and was never sick nor troubled by any problems with his heart. My brother turned 82 years old this year, 2007. He told me that as long as he lives, he will never be able to forget the way Padre Pio looked at him with those beautiful, piercing eyes.