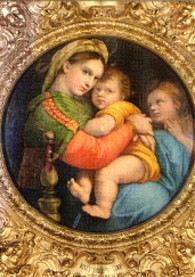 My daughter Elizabeth was 8 years old when she was diagnosed with Hodgkins disease, a type of cancer. She stayed at Our Lady’s Children’s Hospital in Dublin for a number of weeks. I used to visit her on my lunch break from work every day and also at the end of my work day before going home. Her throat was affected by the disease and she lost the ability to speak. One day a nun, who was the head nurse on my daughter’s ward, pulled me aside to speak to me privately. She did not want my wife to overhear our conversation as she said that my wife seemed to be a very emotional person. She told me that Elizabeth was not going to survive the cancer.

After she told me that, I went to the Capuchin Friary at St. Mary of the Angels in Dublin. One of the Capuchin’s, Father John, had a glove of Padre Pio’s. I asked him to visit Elizabeth and bless her with it. I have had a devotion to Padre Pio for many years. I have also attended daily Mass for almost 50 years, since the year of my marriage in 1960.

Father John came to the hospital and blessed Elizabeth with the glove as well as all of the other children who were there. Not long after, I was having a meal at the Fish and Chips restaurant on Kimmage Road in Dublin. Suddenly, the whole area was pervaded with the fragrance of roses. I instantly knew it was Padre Pio. I also thought to myself that it was an odd place for him to make his presence known.

A few days later, I spoke to the head nurse again. She told me that she had astounding news for me – all of Elizabeth’s tests were normal. My daughter recovered rapidly and completely and her voice came back full strength. When she got older, she sang professionally throughout Europe.

I believe that through the intercession of Padre Pio, my daughter was healed.