My father, Michael DeMaria, is greatly devoted to Padre Pio. His own father, my 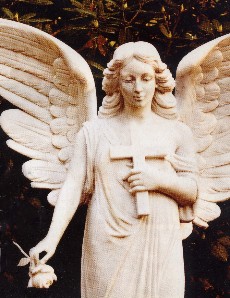 grandfather, had gone to confession to Padre Pio in the late 1940’s. When he went into the confessional, Padre Pio greeted him by his first name, John. My grandfather asked him how he knew his name and he told him simply that he knew many things. Padre Pio also told my grandfather that he would have a very good life in America and his words proved to be true. Things went very well for my grandfather when he moved to America.

My father had a very serious fall which caused bleeding in his brain. He was close to death. He was taken to the hospital in Akron, Ohio, and had brain surgery. My mother was told by the doctors to get all of his affairs in order because he was not expected to live. When I visited him in the intensive care unit of the hospital, his kidneys were failing and besides the brain surgery, he had many other serious health problems and complications too numerous to mention. I printed out some testimonials about people who were gravely ill who had been healed through the intercession of Padre Pio. I taped them to the wall in the hospital beside my father’s bed. That was when my father told me that Padre Pio had come to him and stood beside his bed and prayed for him. Padre Pio assured him that he would be all right. He said that Padre Pio spoke to him in English. My father even described the brown robe that he was wearing. My father was in intensive care for many weeks and in the hospital for a total of six months. That was three years ago. In 2006, my father celebrated his 81st birthday. Our family knows, without the intercession of Padre Pio, my dad would not be here. When we visited the Padre Pio shrine in Pennsylvania, my father had an opportunity to hold Padre Pio’s glove. As he looked around at the grounds of the shrine, my father softly said, “This must be what Heaven is like.”