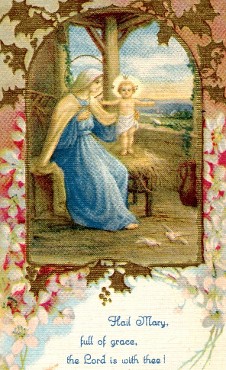 I have a friend named Glenda who is a Protestant  and belongs to the Presbyterian denomination. I shared with her the prayers of Padre Pio and told her about his life and his familiar saying, “Pray, Hope, and Don’t Worry.” I gave her a Padre Pio Rosary. I also gave her a pamphlet on how to pray the Rosary and suggested that she pray it each day. Glenda thought it was a good idea and began to pray the Rosary every morning. She told me that whenever she had entered a Catholic Church in the past, she always had a special feeling. I told her that she was feeling the real presence of Jesus in the Blessed Sacrament.

Glenda had to go to the hospital for quadruple bypass heart surgery. Her sister called me to let me know that she came through the surgery just fine. However, her sister said that the doctor had come to her room the next day and he was perplexed. He told Glenda that she was repeating some initials during the operation and he as well as all of the doctors and nurses who were attending her, were curious as to what she was saying. He said that none of his patients had ever murmurred even one word during open heart surgery. The anesthetic they are given is so strong, that they do not utter a sound in their unconscious state. But Glenda for some reason, was different. “What was I saying?” Glenda asked him. “You were constantly repeating the initials, P, H, D, W  the doctor answered. We would like to know what it stand for. Then Glenda understood and told him, “It stands for “Pray, Hope, and Don’t Worry.” The doctor has since shared the phrase with his patients who are preparing for surgery.